One in two Australian men have had a mental health problem at some point in their lives and an astounding three out of every four suicides are by men. As we learnt from CEO for R U OK?, Brendan Maher, yesterday, it can be as simple as starting a conversation to help encourage action and prevent a life lost.

For electrician Louis Hollman, opening a dialogue about his own mental health saved his life but unfortunately it was too late for his rugby teammate Rhys McNaughton, who sadly committed suicide in 2015 after suffering in silence, leaving his friends and family shocked and devastated.

Speaking openly about emotional turmoil can be hard, particularly for men due to the outdated ‘unmanly’ stereotyping and the stigma of embarrassment and notions of weakness surrounding sharing emotions. Data from the Australian Bureau of Statistics identified men as the least likely to seek help for mental health issues and research has shown more men commit suicide than women. Whether due to a macho ‘show no weakness’ bravado between mates or feeling ashamed to admit to needing help, an honest conversation has never been more vital, as Louis Hollman and his family know all too well. 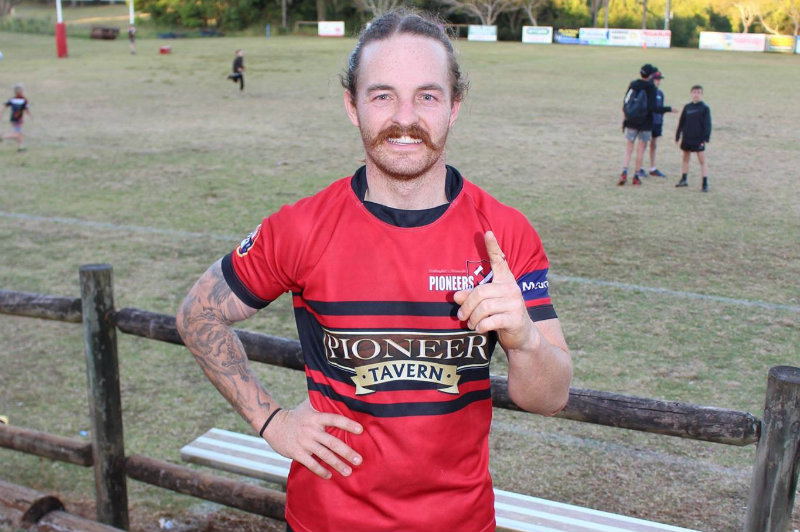 Growing up in the small country town of Bourke in western NSW, Louis developed a passion for rugby from a young age, following in the footsteps of his father Mark who had coached the local Rugby Union team for over 20 years. Spurred on by his family, Louis played his first major game at 15 and won the 2007 Grand Final under the watchful eye of the team’s coach, dad Mark. After leaving school Louis signed to play in Sydney for Randwick, completing an electrical apprenticeship in between stints on the team. Fit, strong and playing well, Louis was determined to ‘give it a real crack’ but living alone, far away from his friends and family, started to take its toll.

‘Things just started to go south, me and my partner from Bourke had separated, I’d been dropped from a team in rugby, work was getting slow… And at the end of the day going home to an empty house just wasn’t making anything better. I’d get home from work and some days just drop to my knees in tears for hours and couldn’t pick myself up, but I just couldn’t find the courage to speak to anyone,’ Louis explains.

‘Everything got worse. I would start off by missing a training session then missing a meal, then I started losing so much weight from not eating. I was getting dropped from teams and hardly getting a run by the end of it. My rugby dream literally went straight out the window.’

Not everyone who is struggling has the strength to reach out and the ramifications can be devastating. However, learning to identify signs that someone may not be OK is the first step towards taking action. A sudden change in behaviour, losing interest in a hobby or passion, physical changes such as weight loss or gain and absence from usual activities are all telltale signs to look out for.

In Louis’ case, he was isolated from friends and family by distance, but a brave early attempt to be honest was an important first step: ‘I can remember one day driving home from work and I rang my dad and said: “Dad, I think I have depression”,’ Louis recalls. ‘My father is my idol, he taught me everything I know about rugby and is just the ultimate dad. I couldn’t ask for anything more of my parents but that was the only time I ever told him how sad I was. Things never got better. Dad talked to me and asked me how I was feeling but I don’t think he understood the extent of the depression. After that conversation, I never told my parents again. I think a lot of parents don’t know how to deal with mental illness and their children don’t want to admit what they’re going through.'

Though he was playing in a team sport, being the ‘newbie’ Louis didn’t feel he had anyone he could talk to about his struggles and the symptoms worsened: ‘I didn’t want to unload my problems on these new guys I’d just met. My coaches would always ask why my form was down or why I was missing training or why I looked so down, but I would just tell lies that I had to work, that I couldn’t make it on time. I turned into a different person and was in too deep to realise what I was doing,’ Louis admits.

Looking back now and remembering how he felt, Louis feels deeply upset about the person he became, claiming it just wasn’t him: ‘I found it very hard to speak to people. My parents were so worried about me, but they never knew to any extent what I was going through. In my eyes, I always thought my parents expected so much of me and I never wanted to let them down, I couldn’t let them see how bad I was.

‘Bad thoughts started going through my head, sometimes I would just think I can’t handle this pain anymore and I’d rather end my life to get rid of it. To be honest, that’s how dumb I was, in my head that was the only thought I could come up with to end the pain I was in,’ Louis explains.

Thankfully, after 10 months of staying quiet, Louis found the courage to talk to some friends and things slowly started to improve.

‘I moved to Spain and played a rugby season over there at the end of 2015 and got back in about April 2016,’ Louis says. ‘I moved to Ballina and started my own electrical business and currently play rugby for Wollongbar Alstonville Pioneers. This year I’m going for my third Grand Final in a row. Looking back now I feel good because it’s shown me how strong I am inside and what I must do to get through tough situations.’

Louis attributes some of his newfound happiness to joining a local Christian church and becoming part of a community where he didn’t feel judged and could relax. 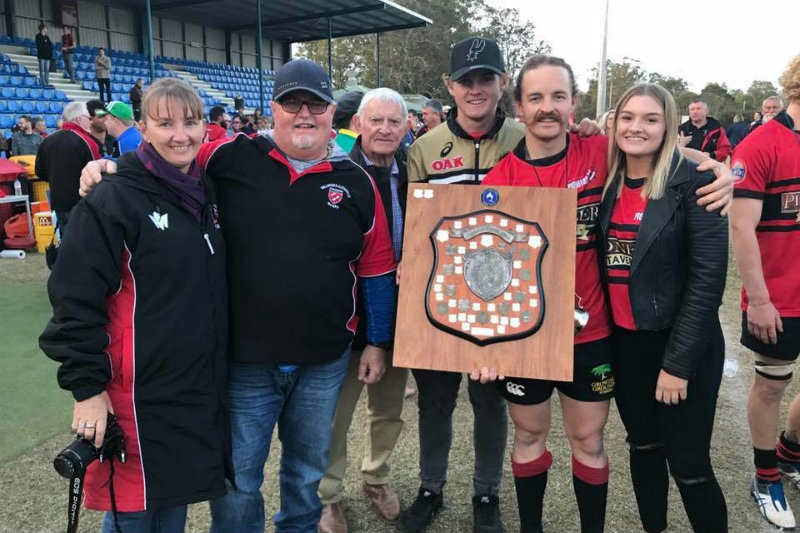 Fresh off the plane from Spain, Louis joined a rugby club and soon learned of the loss of a much-loved teammate, Rhys McNaughton, who had taken his life earlier that year after battling with mental health issues. It was the first game since the tragedy occurred and the loss struck a chord with Louis, who was all too familiar with the struggles ill mental health can bring.

‘Within the first year of me being here and meeting new friends, I found out how much of a genuine guy Rhys was. He was a student, rugby player, model, you name it. He would never show any signs that he was going through his own dramas, so I think it was a very big shock when it did happen. It goes to show that anyone can suffer no matter who you are,’ Louis reflects. ‘After going through what I did years before, I said to myself I would always try my hardest to help anyone around me that I could. I never wanted any of my friends, family or even strangers to go through the pain I did.

'The team was not coping well, and I was coming into a new environment trying to be a happy person and make new friends, I never knew what was going on. I’ve had a lot of guys since approaching me about spending time with them and talking about troubles and problems in their life and I am proud to say that I think I’ve made a difference.’

Feeling empowered by his growing positivity and strength, and sharing great empathy at the loss of Rhys, Louis started to grow a moustache in aid of Movember to raise money for the men’s health foundation. Growing fond of his new tache, Louis found himself too attached to shave off his impressive facial hair, nicknamed ‘Marvin’, and decided to keep it. Two years later and bushier than ever, he was ready to say goodbye for a cause close to his heart. 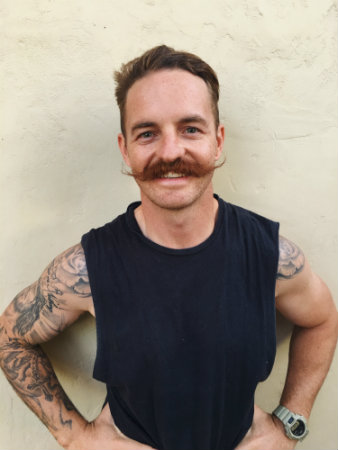 ‘The Zeffa Cup, which I’m holding this event for, is in memory of Rhys 'Zeffa' McNaughton who played rugby for Wollongbar and for Lismore Uni. After he took his own life in 2015, the two clubs started to hold the Zeffa Cup, playing against each other in honour of Rhys to keep his memory alive and continue the conversation about mental health. Each year one team takes a turn in holding the fundraiser. We pick a different jersey to play in and put both team’s logos on it. Players get priority if they want to buy their number, if not the rest get auctioned off and all money goes to the designated charity, Beyond Blue,’ Louis explains.

Louis shared his personal story with friends, family and strangers as he rallied round collecting raffle prize donations and money for his sponsored shave which took place at the 2018 Zeffa Cup held last month, raising a staggering $10,500 in total for the mental health charity.

‘I run my own electrical business, play footy and enjoy a beer, that doesn’t mean mental health hasn’t affected me and those around me. I want everyone, particularly men, to know it’s OK to reach out for support.’

If you know someone who is struggling, or you are facing difficulties yourself, you can reach out to any one of these charities for help and advice: Have you ever dived into a pool and felt the watery adrenaline rush as you propel head first through the cold sali...