by Ali Humphrey reviewed by our Nutrition Team 10 September 2019 When I speak to Matt Caruana for the first time, I’m not sure what to expect. I hope he’s chatty, then remind myself that of course he is – he speaks for a living. When he picks up the phone I am quickly captivated by the voice at the other end – one of a person still young and somewhat shy, yet emanating self-assurance and a deep sense of pensiveness at the same time.

Matt begins his story by telling me about his childhood in Sydney. He grew up like any other boy in the heart of the Hills district, enjoying sport and loving music. He had plenty of friends, a stable family life and felt safe and comfortable in his neighborhood.

But, by the time he was 12, some heavy questions weighed on his young mind: What is the purpose of my life? What do I contribute to society? And, perhaps the most troubling: If I was dead, would anything change?

While these are questions most of us naturally wonder from time to time, they bothered Matt deeply, and in a way he couldn’t seem to shake.

‘I lived at home with my parents, I didn’t have a job, I played no part in society,’ Matt explains. ‘If I was gone, nothing would change, therefore, my life meant nothing.’

Matt didn’t feel he could speak to anyone in his life about the worries that followed him through the schoolyard: ‘I grew up in a family where we only spoke about our wins and triumphs,’ he explains. ‘If I was to talk about feeling down, that just wasn’t right.’

Just like the countless (and growing number of) young people that fall victim to mental health issues every year, Matt fell into a deep depression that consumed his life. By the time he was just 13 he had turned to drugs and a path of destruction to escape his thoughts.

‘I felt worthless, but those were my problems. I felt like I needed to change that… but I had no means of doing so.’

Unable to open up to anyone, he only revealed his true feelings to his girlfriend at the time once she had discovered the truth about his drug use. When I ask him if he thinks a conversation early on might have led him down a different path, he says: ‘It definitely would. [Now I know] it’s ok to open up and actually ask for help.’

By the time he was 16, Matt had reached a point where he felt that there was no way out of his depression. On the 9th of January 2016 he leapt from a building in an attempt the end his life, but thankfully did not succeed. Instead, he awoke with a spinal cord injury that would shape his new life as a paraplegic.

‘I felt even more worthless… a whole other level of pathetic,’ Matt remembers. He spent a year in and out of hospital undergoing rehabilitation and under constant watch with two visits from a psychologist per day.

‘Before my injury I didn’t like talking about how I was feeling and afterwards, nothing had changed. I hated it. I didn’t speak to anyone about anything for a year. When strangers on the street asked me what happened, I always said I’d had an accident, that I fell off a building.’

It wasn’t until a random encounter with an uncouth stranger that Matt was pulled towards the first steps in recovering his mental health. A week before he was due to leave the hospital for good, his mum took him to get his eyebrow pierced as a celebration. On the train back to hospital, a man stepped on and began staring before asking ‘what did you do to yourself?’ It was a question he’d heard countless times before, but this time, something was different.

‘I swear it was a mixture of how excited I was about the piercing and how abrupt this guy was, but for the first time, I just said I’d attempted suicide. And to that he said: “well that was pretty fucking stupid wasn’t it?!” I wasn’t expecting it all, but he laughed, so I laughed too.

‘The next morning I woke up with this sense of energy I couldn’t remember last having. It was like a weight had been lifted off my shoulders. He was the first person I told,’ says Matt.

For the first time, Matt went to visit his social worker of his own accord. She made him realise that opening up to people was the key to his recovery and to the quality of his mental health and relationships for the rest of his life. It was the beginning of a new chapter for Matt.

The next step to regaining his life was discovering his voice as a motivational speaker. Around a year post injury, he was asked to share his story during a program at Royal North Shore hospital.

‘I was scared,’ Matt recalls, ‘But, before I said no, my heart told me, “you might help someone, imagine that”. The kids thanked me afterwards and told me they got a lot out of it. I was holding tears back, but I let them out after they left because I realised that, what I thought was the worst thing to ever happen to me, was the one thing I was now most grateful for.’ 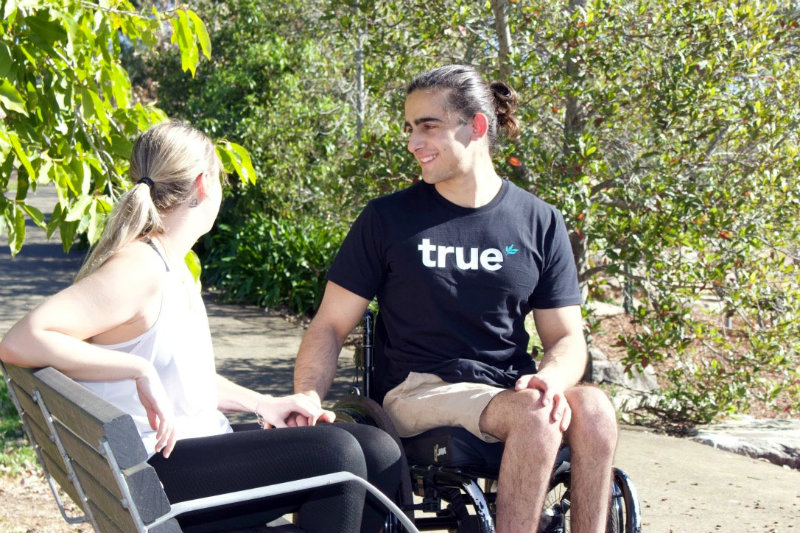 It was a defining moment for Matt – not only was sharing his story life changing for his own mental health, it helped countless others along the way. Ever since, Matt has spent his time speaking to schools, universities and corporate conferences. He has spoken to approximately 5,000 school students, telling his story and spreading his message.

‘I’m no longer worthless. Yeah, I’m a paraplegic, but my greatest disability has been healed,’ Matt tells me, his voice even and sure. ‘Now my passion is my mission: to instruct, inspire, influence and impact peoples’ state of mind so they can change their lives.’

Though it was a huge part of the remedy for him, Matt doesn’t stick to finding fulfillment as the central theme of his talks: ‘I speak about mental health, but mostly supporting each other and creating unity. My main points used to be do what you love, seek purpose and fulfillment. But I can’t tell someone who’s depressed to seek purpose because that’s not going to resonate with them. So, I shifted my focus to another point, which I think more people will understand: to think about who you’re surrounding yourself with, understanding that they influence the way you think, feel and act. When I first implemented that into my life everything started changing.’

Matt’s voice lifts as he tells me that members of his audiences often approach him afterwards to thank him or tell him about the changes they want to make in their lives and relationships: ‘Even if it’s just one person – that excites the hell out of me! Knowing I have the ability to inspire someone, that energises me.’

Although he was initially nervous to speak to anyone about his story, Matt now relishes the opportunity to use it to help others and grow himself in the process.

‘I’m continually learning that these little steps outside of my comfort zone are benefitting me,’ Matt reflects. ‘While they might be painful, they’re a step in the right direction. Now I welcome them into my life.’

When I ask how Matt keeps positive and looks after his mental health today, he explains that continually working on himself physically, spiritually and emotionally takes up a lot of time. ‘Meditation has made profound changes for me. I’m doing a course at the moment, and I try to read lots about it,’ he says.

Fitness has also played a huge role in Matt’s recovery and his ongoing physical and mental health. CrossFit has become his favourite pastime: ‘Before my injury, it was just about being the biggest guy,’ he laughs. ‘I didn’t realise that I was just insecure and feeding my ego.

‘I started CrossFit because I wanted to push myself physically and mentally. It’s more goal oriented now [and] I don’t focus on numbers anymore. Now, it keeps me sane. It’s the one time of day where I don’t have to worry about anyone, it’s just me. It’s like another form of meditation,’ he explains.

‘I’m a firm believer that what you’re putting your attention towards is what will manifest. If you focus your energy on recovery and empowerment rather than statistics, you’ll see a shift.’

When I ask Matt what his words of advice would be to anyone on this R U OK? Day (12th September 2019), he thinks long and hard: ‘Be aware of who you’re surrounding yourself with,’ he says finally. ‘Know that people change and influence how you think, feel and act. Knowing that has played a huge role in my life and recovery.

‘Don’t get me wrong, I still have my bad days, but I don’t remember being depressed, anxious or suicidal. I don’t remember what that’s like. My beliefs about myself, about my life and about everything have completely shifted.’

After speaking to Matt for almost an hour, I sit at my desk, reflecting on the conversation we just had. Perhaps my favourite thing about speaking to Matt was how much thought and openness he put into his words, as if we were old friends just having an honest conversation. I felt privileged to sit back and listen to his story, and it made me think – if it’s so easy to have a profound talk with someone you don’t know, how hard can it be to ask someone you love if they’re ok this week?

R U OK Day 2019 takes place on Thursday 12th September. If you would like to make a donation you can reach out here: www.ruok.org.au

If you know someone struggling, or you are facing difficulties yourself, you can call Lifeline at any time on 13 11 14 Life knocks us all down from time to time. A stressful job, loss of a loved one, a relationship breaking down, exa...