Protein for Vegans: Where to Find It

Worried a vegan diet won't provide sufficient protein? Have a read of where you can find the best meat- and dairy-free protein sources

Feel like it is impossible for a vegan to come up with a diet plan that would provide them with sufficient amounts of protein?

Wrong. While the main protein sources are animal-based, the fact is that there are a lot of foods enriched with types of protein suitable for vegans you are not familiar with.

While we’ve already covered some basics on vegan protein, we intended this article as an expanded source of information on the subject. Find out what vegan protein is, how much protein your body requires on a daily basis, and discover natural, non-dairy vegan sources, alongside several delicious recipes.

Can meat-free protein be considered ‘complete’?

When speaking of ‘complete’ protein, the term refers to amino acids which are the building blocks of protein. In order for a protein to be considered ‘complete’, it has to contain nine essential amino acids in roughly equal amounts, and guess what – vegan protein can also be ‘complete’, in the same way as the protein found in meat.

How much protein do you actually need?

Nevertheless, the right amount of protein for an individual still depends on their physical state – their age, current state of health, muscle mass, physical activity levels, physique goals, and many other factors.

Of course, vegans sometimes opt for a vegan protein shake or any other kind of vegan protein supplement which can further improve their diet and contribute to daily required protein intake. That’s never a bad option if you feel like you need a little bit of nutritional boost. For instance, our True Vegan 85’s protein content is 85% in natural form and is 100% derived from plant-based sources. It is also a great option for those seeking for a non-dairy alternative.

Where can you find your vegan protein?

Vegan protein can be found in dozens of delicious foods, and here we will present six best, easy-to-find vegan protein sources to explore and add to your meal plan:

6 grams of vegan protein per 1 cup of cooked buckwheat

Contrary to popular belief, buckwheat actually isn’t a type of wheat – in fact, it’s more similar to rhubarb. Apart from being really rich in protein, some studies show that this plant can lower blood cholesterol, improve circulation, and control blood glucose level. People often use it as flour, by grinding their seeds and using them as a base for gluten-free pancakes. On the other hand, the Japanese make delicious noodles called soba, which are also a great way to have a good meal rich in vegan protein.

A vegan recipe you need to try out: Blueberry Greek yogurt pancakes with buckwheat flour 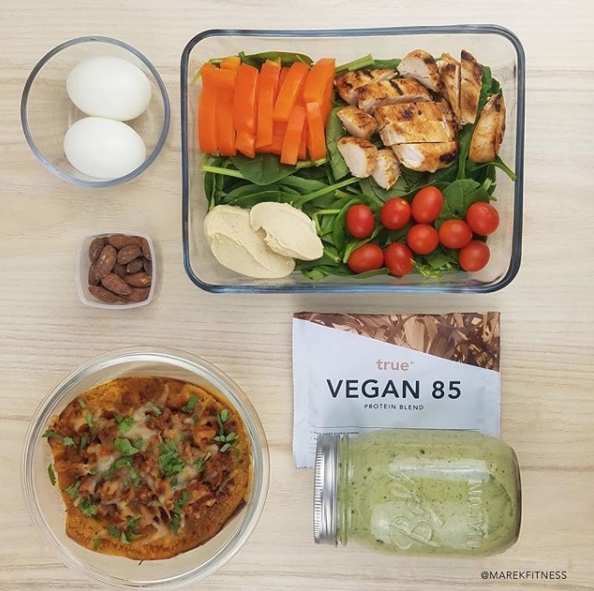 8 grams of vegan protein per 1 cup of cooked quinoa

Quinoa is one of the most famous vegan protein sources, and many are familiar with it because it looks quite similar to couscous. However, it’s way more nutritious, which makes it perfect for a meat-free diet. It is a great substitute for rice, whereas a lot of vegans use it to make cookies and muffins. Breakfast casserole Quinoa is also full of manganese, iron, and magnesium, which places quinoa at the top of every vegan grocery list.

Vegan recipes you need to try out: Check out our Vegetarian meal prep with Marek Fitness

63 grams of vegan protein per 1 cup of seitan

This fantastic vegan protein was created by Chinese Buddhist monks more than a thousand years ago, and the amount of protein per one cup makes it the best vegan protein out there. Basically, seitan is made by mixing herbs and spices with gluten (also known as the protein in wheat), hydrating the mixture with stock or water and then simmering it in broth. However, that isn’t the end of the process, as it needs to be cooked in broth enriched with soy sauce later on. This step is essential as it contributes to a tasty, meat-like final product, which is exactly what makes it great for novices at vegan diet. 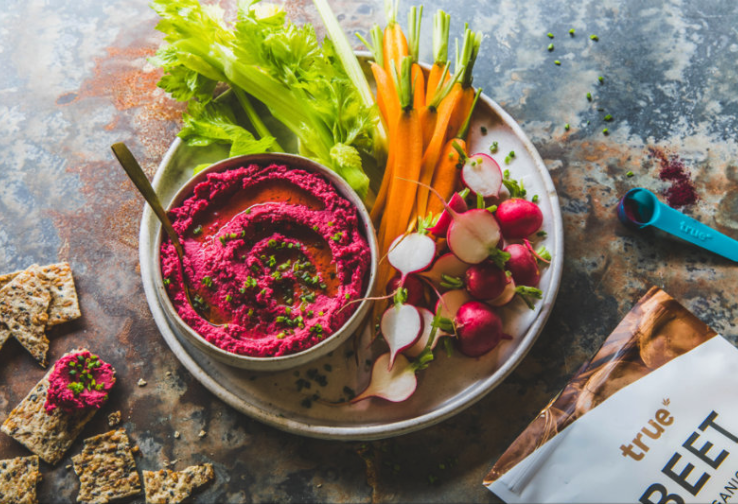 The chickpea, a legume used to make hummus, is extremely rich in lysine, one of the nine essential amino acids. It becomes even more important simply because the whole-wheat pita is deficient in this amino acid, which makes this combo more than perfect for vegans. You should also know that most legumes have a similar amino acid profile, so you can also use edamame, cannellini, or any kind of beans instead of chickpeas.

A vegan recipe you need to try out: Beetroot hummus

8 grams of vegan protein per 2 slices of Ezekiel bread

Ezekiel bread is another dish extremely rich in essential amino acids, and it’s actually a mixture of wheat, barley, beans, lentils, millet, and spelt. This turns out to be a fantastic and nutritious combo which makes one of the most amazing vegan protein sources. You should also know that this bread is usually made from sprouted grains, which improves its digestibility, as well as its vitamin and fiber content.

20 grams of vegan protein per 1 cup of firm tofu

30 grams of vegan protein per 1 cup of tempeh

30 grams of vegan protein per 1 cup of natto

If you’re looking for a perfect protein for vegans, which is a wonderful substitute for meat at the same time, you should definitely pay attention to soy. You’ll be happy to hear that it’s a complete protein, meaning that it contains all nine essential amino acids in roughly equal amounts. Tofu is one of the most famous soy products, and here’s a little tip for you: the harder the tofu, the higher the protein content. On the other hand, tempeh and natto are also great sources of vegan protein, and they’re made by fermenting the beans.

A vegan recipe you need to try out: Boiled spicy tempeh

Evidently, there is a multitude of easy-to-find vegan protein sources you can explore and incorporate into your diet, so be sure you do that as soon as possible. In the end, as already stated, you can always go for vegan protein supplements if you feel like your diet requires additional protein, so make a wise decision and you’ll see a fantastic improvement. This refreshing vegan smoothie is a quick and healthy dessert fix!

From flexitarians to vegans, we explore a variety of plant-based diets, which ones are helpful or harmful to your hea...

Sorry, we don’t have enough in stock to fulfill this order. Pancake - French Vanilla
Free was added to your cart!
Add free gift to cart
No gift for me thanks