Natural vs. Synthetic Caffeine - Everything You Need to Know

by Ali Humphrey reviewed by our Nutrition Team 24 May 2019

Want to avoid the caffeine crash? Learn how the origin of your caffeine can affect your performance Caffeine – now the most commonly consumed drug in the world – has a history rooted back to ancient times. There is evidence of coffee being concocted in Arabia, cacao forming a part of daily diets in South America, and tea part of a social ritual in ancient China (1). In antiquity, its effects were swathed in myth and legend, said to contain brain-boosting properties and powers.

It wasn’t long before the appeal of these natural substances had spread across the globe. By the 17th Century, the social consumption of tea, coffee and chocolate had become firmly ingrained in Western culture – with little sign of budging. Today, we’ve used science to investigate the properties of caffeine and define its ‘powers’ for good.

Firstly - Is Caffeine Bad For You?

Caffeine can be found in energy drinks, food and even health products. For many, it forms part of a daily routine, with coffee being the most widely consumed beverage in the world. As it is now so commonly available and obviously highly addictive, caffeine has invited much speculation as to whether or not it is actually safe to consume.

Modern research has consistently suggested that caffeine taken in moderate quantities is perfectly fine for your health. There has even been claims that caffeine can protect against conditions like Alzheimer’s disease (2). While the certainty of such claims is still somewhat ambiguous, one thing remains clear: caffeine makes the world go round.

While many may think they are addicted to coffee or energy drinks, in actual fact it is the caffeine content they struggle without. While effects are dependent on a host of variants such as weight, age and gender (3), tolerance to caffeine builds quickly. In this way it can be easy to over consume caffeine, which has sometimes been linked to side effects like nervousness, heart palpitations and difficulty sleeping.

As with any stimulant, it is important to take your body and tolerance into consideration. A conservative dose of caffeine at the right time of day should be nothing to be concerned about and could even help to improve your focus and cognitive performance (4). All things are best enjoyed in moderation and it is no different for your daily coffee hit.

Caffeine as an Athletic Booster

It makes sense that fitness junkies have used the powers of caffeine to their advantage: research suggests (5) that caffeine can boost athletic performance through improved muscle strength, endurance and exercise speed. As such, it is the preferred pre-workout supplement of many athletes and gym enthusiasts.

Caffeine is handy to give you an energy boost in time for an early morning or post-work gym session. Many people find they love True Pre for the ‘pumped’ feeling it gives them before exercise, which can improve mindset and motivation. Alternatively, True Pre is also available without caffeine for those who prefer supplements without stimulants. 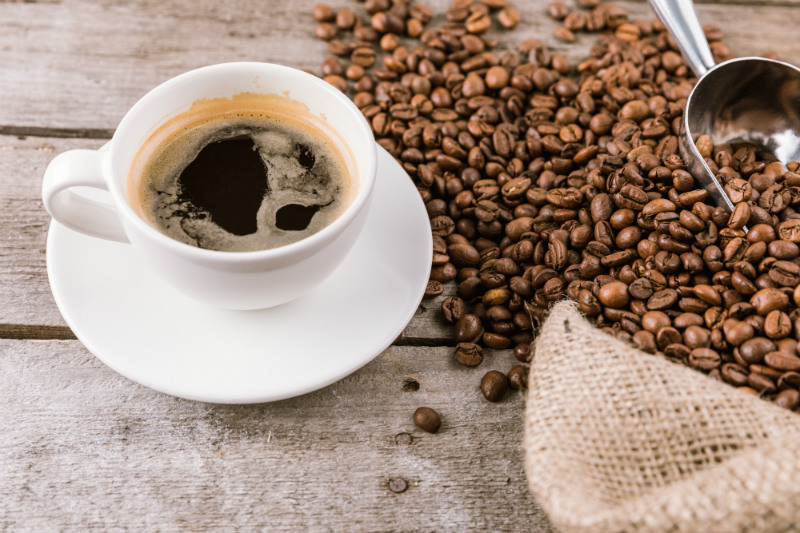 Caffeine was first discovered naturally occurring in plants such as cacao, guarana berries and yerba mate. It is now known to be present in over 60 different plant species. Natural caffeine is rarely found on its own; it is often present with a range of vitamins and methylxanthines also found in the plant.

These vitamins and methylxanthines balance the lift and fall of the caffeine in your system and assist in delivering it to your body in a steady manner (6). This promotes a more sustainable energy boost than synthetic caffeine does, enabling mental clarity and focus for a longer period.

A sustained release of caffeine can prevent sudden jitters and subsequent crash commonly associated with synthetic caffeine products like energy drinks. Because of this more gradual release, natural caffeine doesn’t instigate side effects such as nervousness, difficulty sleeping and a flushed face nearly as much as synthetic caffeine (7).

An easy way to decipher whether a product contains natural caffeine is to take a look at the nutritional panel. It is usually labelled as the plant form rather than ‘caffeine’, and this is because the naturally occurring caffeine content within the plant is hard to quantify. 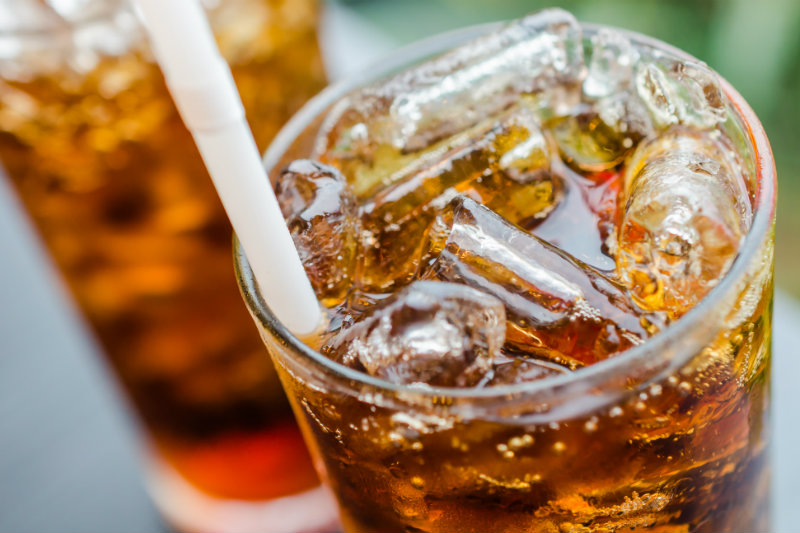 Synthetic caffeine was first synthesis in the 1800s and was used heavily by the Nazis during WWII. Embargoes prevented them from obtaining various goods (caffeine included), and a synthesised version was created to keep supplies available. With demands for caffeine steadily rising since then, synthetic caffeine has since become the norm, especially in soda and energy drinks. Today, many consumers are unable to identify where the caffeine in their food has come from - or are even aware that a synthetic version exists.

Synthetic caffeine is cheaper to produce than it is to source natural ingredients, and consequently, it is more widely found in bottled beverages and food products. It is mass produced by companies such as Coca Cola and made to be highly potent (and therefore cost-effective). As little as two teaspoons of it could be lethal to a human.

Synthesised caffeine is absorbed through the digestive system much faster than naturally occurring caffeine (8), providing a quicker spike and therefore a quicker crash. While synthetic and natural caffeine is barely distinguishable on a molecular level, it is the way in which the synthesised version is produced that can prompt concerns.

Problems With The Synthetic Caffeine Industry

As many global companies require enormous supplies of caffeine as an ingredient in many foods, soft drinks, energy drinks and workout supplements, supply and demand needs have grown. Natural sources of caffeine are inconvenient and expensive to source, so lab production is the new norm.

It isn’t uncommon for synthetic caffeine to be produced in unregulated labs in foreign countries without any verifiable record of their handling. Foreign inspections are infrequent and thus the door is left wide open for corner cutting in regards to following health regulations (9). This is highly concerning, especially as the dominant producer of the world’s caffeine supply is the same nation consistently in the media for contamination issues with products such as baby formula and medical tablets. Furthermore, much of this industry is still opaque and fairly difficult for consumers to research themselves.

Synthetic caffeine undergoes many steps to be converted from its initial form as ammonia. Generally, it is exposed to harsh chemicals during production, such as methylene chloride, ethyl acetate and carbon dioxide. Furthermore, synthetic caffeine glows – a rather frightening look – which is removed by rinsing the caffeine with sodium nitrite, acetic acid, sodium carbonate and chloroform (10). All these ingredients sound scary – not at all like substances you want to be consuming when you drink your morning coffee!

Of course, not all synthetic caffeine is dangerous or harmful when consumed in small quantities. The reality is that you have probably unknowingly consumed it sometime this week or even today. It is always beneficial to be more aware of where the products you buy come from – so next time you read the word caffeine on a label, ask yourself where it may have come from, and if it’s something you really need. Production processes aside, synthetic caffeine is often paired with energy drinks and sodas outrageously high in sugar and full of artificial ingredients. They are generally hollow calories and do nothing but damage our health. If it’s that buzz you’re looking for, there are plenty of available alternatives with none of the nasty additives.

True has created a range of products that contain natural caffeine, making them a healthy way to get your energy fix.

True Pre is a pre-workout blend designed to maximise your workout performance. Formulated with scientifically backed doses, it uses an 11-ingredient recipe to deliver an all-natural supplement. Pre is also available without caffeine for those who like a boost but without the stimulant.

Our Whey Protein Isolate (WPI), Whey Protein Concentrate (WPC) and Vegan85 are also available in a coffee mocha flavour, a combination of natural chocolate flavours and real coffee. Containing approximately 25g of protein and 70mg of caffeine per serve, these blends are perfect for those who are looking to boost their protein intake while also getting the added boost of caffeine.

True has crafted all formulas to contain only the highest standard of production and best quality ingredients. All caffeinated products come with a disclaimer and recommended dosage on the packaging, clearly advising you on how best to enjoy our products.

Unless you don’t mind the fatiguing synthetic crash and questionable production process, choose natural caffeine when possible. Not only will it provide a longer, more sustainable energy boost, it’s also far less likely to be contaminated with any chemical by-products. It is for these reasons that all of True Protein’s caffeinated products only feature natural caffeine. Knowing the difference between natural and synthetic caffeine is critical to ensuring you are consuming the products most beneficial to you.

Hopefully, now you know the basics, you’ll be able to avoid the synthetic crash and opt for a caffeine product that maximises your results in and out of the gym! Most of us fast every day without even realising it - when we're asleep! But could a more intentional approach prove ... Whey Protein vs Casein Protein: Which is Best For What? We've added a Free Raw Snack Bar to your order!