by Natalie Crofts reviewed by our Nutrition Team 13 September 2019 Record-breaking swimmer, international dressage champion and Paralympic canoer, all by the age of 33; True Athlete Susan Seipel isn’t one to shy away from a challenge. This blaze of athletic heroics is undeniably impressive but there’s something else that makes her sporting achievements so extraordinary: Susan is a para-athlete.

Susan’s competitive spirit was awakened at the tender age of four when she took to the water as a form of physiotherapy: ‘I wasn’t born with all the muscles and joints in my legs; they didn’t form properly,’ Susan explains. ‘I got into swimming because doctors thought it would be a great exercise to improve my disability and my movement range.’

Although swimming ignited her passion for sport, it was horseriding that inspired her to dream big as she set her sights on competing in the Paralympics. 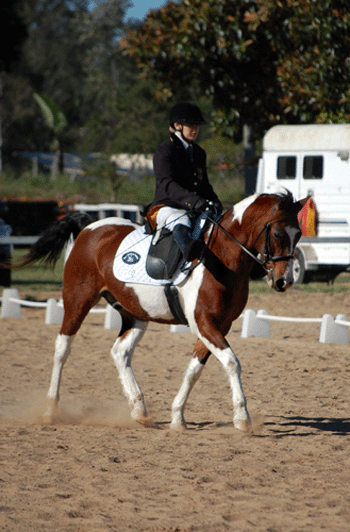 In 2006, Susan made her international debut at the Pacific Rim Para-equestrian Dressage Competition in Canada where she won a bronze medal. Unfortunately, representing Australia came with a price tag and soon the financial strain of competing in para-equestrian became too expensive. So, after 18 years, Susan took a break.

Though she was supposed to be winding down it wasn’t long before Susan turned her hand to another sport. It was a chance meeting with Olympian Amanda Rankin, who was holding a come and try canoeing day, that Susan discovered she had a knack for yet another water sport.

Excelling at three such vastly different sports is a challenge for most, but for Susan, it was an opportunity to push beyond her physical limits: ‘I have always really loved sport and its challenges as, of course, it’s very physical and I have a physical limitation. I’ve always been attracted to trying and proving that I can do physical sports,’ says Susan.

Whilst her disability poses a challenge, adaptations can be made to ensure Susan can compete just like any other athlete: ‘Our boats, compared to the able-bods, do have some limitations on the width they can be. They’re slightly wider but other than that they’re the same type of boat. For me, because I can’t use my legs, I have my rudder fixed straight and I only have to race in a straight line, so I don’t have to do any turns,’ Susan explains.

In 2014 Susan began competing in her kayak, attending the Australian National Championships for the first time where she won all three races, catapulting her to success. She was then selected by Australian head coach Andrea King to represent her homeland at the 2014 ICF Para-canoe Spring World Championships in Moscow. Placing sixth in her first para-canoe international championships, Susan returned to compete in 2015 and again in 2016, when she won the coveted world title.

With the Paralympics back in sight, Susan’s dreams of representing Australia at the highest sporting level came true when she was selected to compete in the 2016 Rio Paralympics – the very the first Games to include canoeing.

‘Rio was incredible!’ says Susan, ‘Just being part of it was something I had dreamed of since I was a little girl. I thought 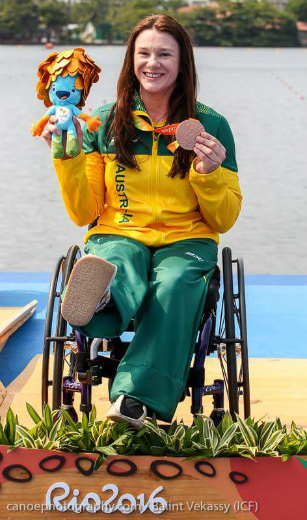 I’d be able to make it in equestrian but when that didn’t happen, I was pretty disappointed. I thought I’d lost my opportunity but then this sport came along, and I was there at the right time to make it. It was a dream come true. The icing on top of the cake was winning a medal.’

Riding high, Susan achieved a podium finish, taking home Bronze in the 200m K1 sprint and becoming the first Australian in history to win a bronze medal in para-canoe at the Paralympic Games.

Overcoming adversity of her own, Susan is an inspiration to others as she continues to share her story: ‘I want to inspire others that are in a similar situation to me, to show them anything’s possible and you can break out of any adversity that you’re facing and overcome it. That’s why I share my story, so that other people in my situation have hope.’

Despite her string of accolades, Susan has no plans to slow down. Having qualified for the Tokyo 2020 Paralympic Games just last month, preparations are already well underway for competing on the world’s biggest sporting stage. A gruelling training regime and schedule of test events will give Susan little time to rest before then.

‘It’s pretty full-on! It’s definitely the most training I’ve done out of all the sports,’ says Susan. ‘We do gym sessions as well as on-water sessions about twice a day. When we’re on the water, we build up to competitions. In the beginning, you start to do a lot of longer paddles over 10k+ a day, 100k a week, as you try to build your base endurance. Then, the closer you get to a competition you do a bit more strength and power all the while working on your technique. In the gym, we do more aerobic to try and get base fitness up.’ 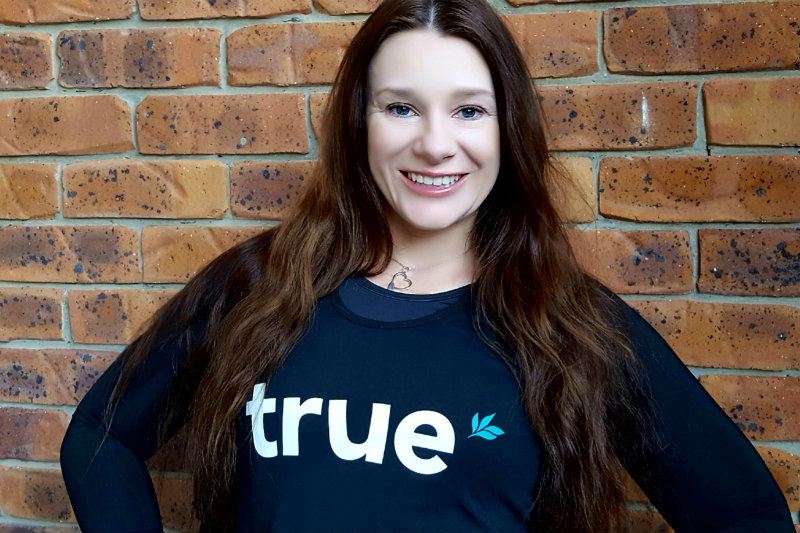 Whilst she walks with an aid out of the water, in the water Susan takes on this fast, dynamic sport with great agility and speed.

‘It is a pretty challenging sport,’ says Susan, ‘It takes a lot of strength and cardio as well as balance and technique. It’s difficult but I love the challenge.’

As the Paralympics draws closer, more than four billion people are expected to watch as the world’s most extraordinary elite athletes take the stage and push in the face of adversity. Whilst on the outside Susan bears nerves of steel, she is well aware of the anxiety inside as the pressure builds:

‘I have experienced anxiety in my sporting career, especially early in my career and coming into big events such as the Paralympics,’ explains Susan. ‘It is normal to experience feelings of anxiety as an athlete because we are constantly putting ourselves to the test in competition and under pressure to perform.

‘Talking with a sports psychologist really helped me find coping strategies to minimise my feelings of anxiety. There is a great deal of focus on having good mental health in sport and sports psychologists are an important part of our support team.’

It takes drive and resilience to compete at an elite level, and Susan has determination coursing through her veins.

‘I love it. I love the challenge. I love that you’re constantly improving yourself’ she says. ‘It’s hard work but it’s also so much about enjoyment and accomplishment. It keeps me going.’

And that’s the power of sport. It has a way of inspiring, healing and motivating in even the most challenging of circumstances.