Crossing four of the world’s most treacherous deserts, 23-year-old ultramarathon runner Jacqui Bell is racing towards the finish line to be crowned the youngest female ever to undertake the 4 Deserts Grand Slam challenge in one calendar year, entirely self-supported. With just three weeks to go until she runs the final leg in Antarctica, Jacqui’s Mission Possible draws ever closer.

Throughout her young life, Jacqui has battled with her mental health: ‘I have experienced first-hand what it is like to feel insecure, helpless and make emotionally-charged mistakes. Even though everything may appear perfectly normal to the outside world, before taking on running more seriously I was battling many inner demons. Professionals call this depression,’ Jacqui explains on her blog. As a driven and ambitious individual, Jacqui turned to running to clear her mind, little did she know it would become the hobby to change her life.

In 2015 Jacqui, who already worked in the fitness industry, had discovered a newfound passion for running and decided to start competing, signing up for her first 50k ultramarathon event aged just 20, going on to enter every race she could get her hands on until her ambition brought her to the 4 Deserts challenge, an ultramarathon series widely recognised as the most prestigious outdoor footrace event on the planet. Raising money for her chosen charity, mental health organisation the White Cloud Foundation, Jacqui set her sights on a $20k target and one of the world’s toughest endurance events to raise it. 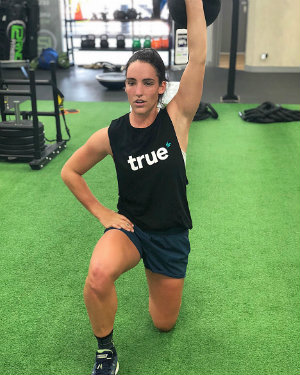 ‘When I decided to do this, I got a running coach. I trained for about nine months leading up to the first race. When I started I was only running 40k a week then I amped it up over a few months to 150k a week,’ Jacqui explains.

Pushing herself to the limit, True Athlete Jacqui kicked off her international ultramarathon journey in April 2018 in Namibia, the world’s oldest desert located in southwest Africa. The stark, arid land of dry riverbeds, soaring sand dunes and desolate canyons can reach temperatures up to the high forties during summer while nights can plummet to below freezing. Running 250km over seven days, Jacqui pushed beyond the limits of physical and mental endurance with zero home comforts; no showers or hot water, no phone and only dry packets of food for fuel, camping on the hard ground at the end of each day.

Hurting from head to toe, it didn't take long before Jacqui was suffering impressive blisters, lost toenails and bruising from her 10kg pack – the race is entirely self-supported, so runners must carry their own food, recovery drink (Jacqui takes True Choc Peanut Butter and Rich Chocolate WPI90), sleeping bag, torch, first aid kit, utensils, sunscreen and the like on their backs as they run. By day five Jacqui claimed it was the toughest day of her life. There were tears, extreme temperatures, heat rash and raw skin to contend with as she tackled the biggest 84km day. With severe pain in her Achilles, burnt and blistered lips, nausea and exhaustion setting in, Jacqui hobbled and crawled her way to the day’s finishing line a gruelling 18 hours after she set off. With her emotions flared and mood at an all-time low, it was a tough start to day six, but the inspirational runner pushed through the pain to finish. Race one was at last complete. 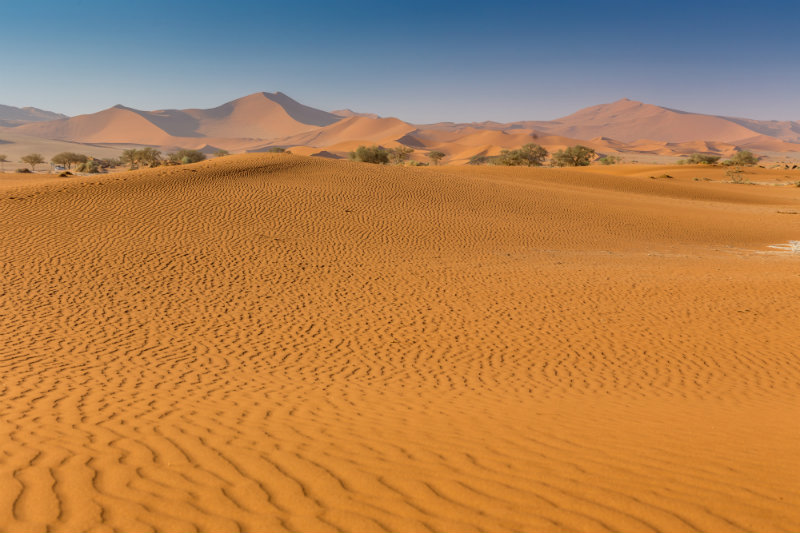 ‘It’s rough, the first event in Namibia was the worst because I wasn’t totally prepared. It was my first ever 250k stage event so I didn’t really know what I was getting into. Ultra running is a sport that takes time to get experience in and your body to get used to,’ says Jacqui. ‘It was hard because I was coming third up until day four and then my Achilles stopped me from being able to run, so I just had to watch people pass me. I went from being able to compete to just trying to get it done, that was pretty tough. After the first race, I had to get scans done and ended up with a walking stick for three days!’

The second 250k race was across the Gobi Desert in Mongolia in July. The fifth largest desert in the world is famed for its extreme weather conditions, rapid temperature changes and landscape laden with mudflats, sand dunes and mountains. Excited and determined to push hard despite her sore foot (Jacqui had been suffering from plantar fasciitis, an inflammation of the tissue that connects the heel bone to the toes) she kept her pace steady and solid to avoid burning out. Finishing in seventh place on day one, Jacqui felt pretty good. The following days brought vertical rock climbs, pouring rain, dirt roads, muddy swamps, river crossings and rogue cows! Every kind of challenge was thrown her way, so much so that on day four the rain had caused such severe flooding that the soaked competitors were evacuated to a sports centre in a nearby town.

‘Gobi was the windiest race and it rained so much. We actually got evacuated from our campsite because all the tents were flooded. I was lucky, I didn’t have to run in the rain. 20 minutes after I finished each day it started pouring,’ Jacqui recalls.

Finishing 10 hours faster than her first race in Namibia, Jacqui was officially halfway through the 4 Deserts Grand Slam and feeling good. 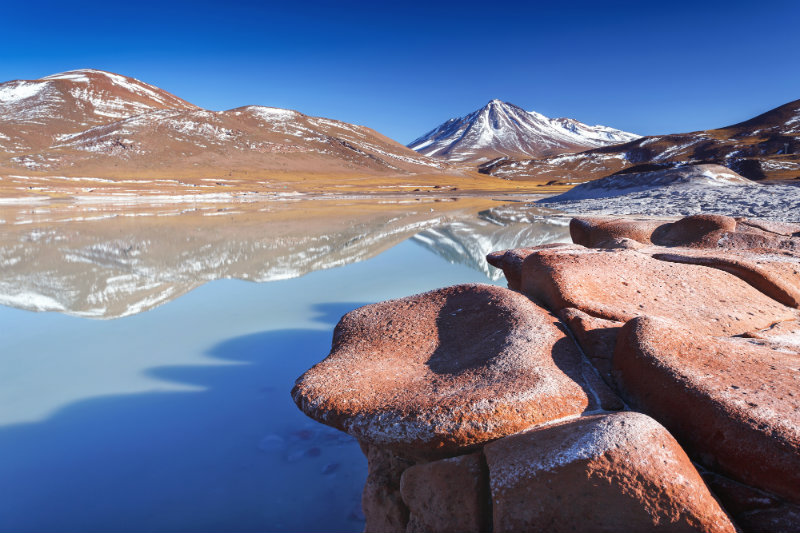 At the end of September came the third race, this time in the Atacama Desert in Chile (pictured above). Reaching up to 4,000 metres above sea level, its vast salt flats, blue lagoons, immense stretches of sand and felsic lava make up the world’s driest desert on the South American Pacific Coast. The high altitude didn’t take long to cause nausea, seriously impacting Jacqui’s appetite. Despite the early sickness, low energy and sore spots, she powered on coming first for the girls on day one. The second day threw up dark tunnels, river crossings, soft sand and canyons aplenty in the sweltering rays of the unforgiving sun, so hot it started to cause Jacqui to hallucinate. Six hours later she was over the finish line and feeling positive. With some of the toughest, most diverse terrain to come, day three didn’t go quite as smoothly.

‘Atacama was the hardest because we were in high altitude and there was elevation, soft sand and the ground was horrible. It was kind of like if you go to the beach and you walk on the rocks and you have to tiptoe and be really careful – we would run through about 20k of that sort of stuff every day. Super easy to lose your footing on. We called it broccoli,’ Jacqui explains. 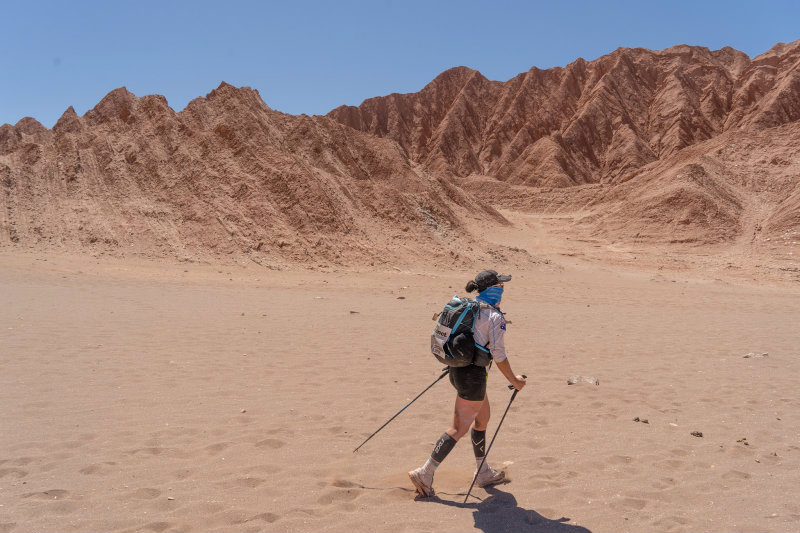 The rocks, sand and salt flats flared up Jacqui’s plantar fascia and with a third heel lift in place and weight being transferred to her left foot, it wasn’t long before some nasty blisters reared their ugly heads and required draining by a doctor at the last checkpoint. Strapped up, Jacqui continued on before losing her way slightly, negotiating a barbed wire fence and unexpected river crossing to get back on track, tackling the final stretch of near vertical dunes on her hands and knees. Through gritted teeth and agony-inducing blisters, Jacqui ran the final few days coming in fifth overall, spurred on by the comradery of her fellow competitors and newfound friends as well as her ever-improving mental attitude the experience has slowly finetuned: ‘I think a lot of the people at the event are surprised that a 23-year-old can do it because usually at 23 you’re not really mentally ready. I think doing the events prepares you more and more because you know that if something crappy happens or if you’re having a bit of a rough day mentally, if you fall apart and start dawdling you add so many hours on to your time that it just drags out the day. You pretty much have to keep it together and push on and try and stay in a positive mindset,’ says Jacqui.

On 23rd November the fourth and final race will take place in and around the Antarctic Peninsula and Mainland. The world’s southernmost continent is virtually uninhabited, home to a rich variety of wildlife and average temperatures of -49°C. Covered in snow and ice, the extreme terrain will throw up a few new challenges as the competitors reside aboard a boat, disembarking on a different island each day to run the allotted distance. However, with the promise of a bed, hot shower and a cooked meal each night, Jacqui is feeling positive about the final leg: ‘I think because I’ve done three now I’ll be pretty ready for it and the thing is we get fed. We normally carry all our food for the week, so if you don’t have enough food, forget something or if you take things you actually don’t end up liking after two days then you’re stuck with whatever you’ve got,’ Jacqui explains. ‘I think Antarctica will be good. I’ve heard mixed reviews on how hard it will be but if the weather’s good then they take you to an island and you could be running 2-15km loops for up to 14 hours.’

Having raised over $15,000 so far, Jacqui has had plenty of support and already has her sights set on the next big challenge; to finish off running 250k in every continent of the world, entirely self-supported.

‘I moved out of home at 17, went to the Sunshine Coast to finish my studies for fitness and then I lived in Bali for nearly 10 months; I worked in a health and fitness retreat over there. I also lived in Melbourne for nearly a year working there, so I’ve always travelled and been quite independent,’ explains Jacqui. 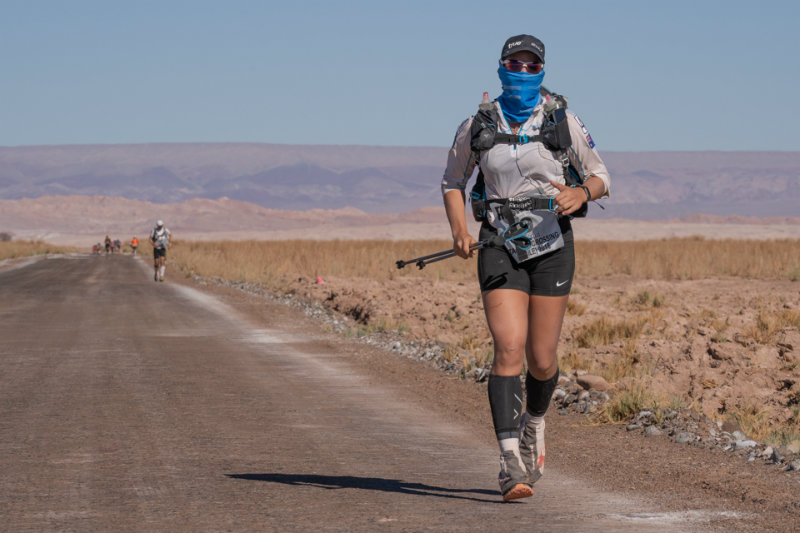 When she’s not running ultramarathons, Jacqui works at F45 and 12RND Fitness as a personal trainer. ‘I have a super addictive personality, so if I don’t channel it in a positive way I can go off track a bit. Working in the fitness industry is really good but it’s hard when you’re in the gym all day to then want to go to the gym again, you can get a bit sick of it unless you have a bigger goal. I’ve found that members of the gym get really excited about what I’m doing. They're all inspired by it and I get a lot of awesome messages from people. For me, I’ve just found my thing and I’m enjoying life a lot more now that I’m doing this,’ smiles Jacqui.

We've added a Free Raw Snack Bar to your order!